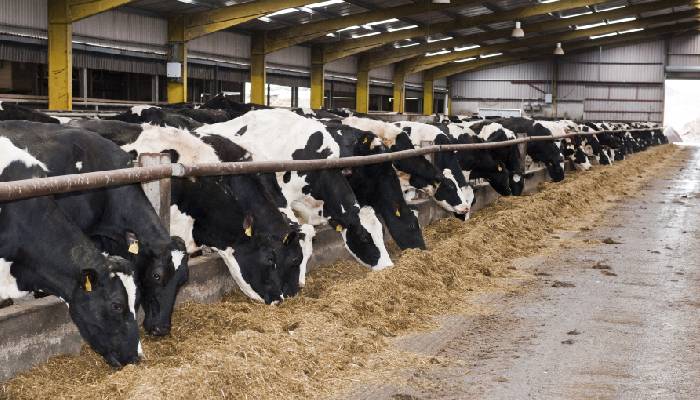 Unlike full time agriculture, dairy farming alone does not prove to be financially rewarding. The main reason is the feed cost which burns a big hole in the pocket. Availability of dry straw and green fodder is a must, all through the year for dairy animals.

Especially during summer or when the monsoon fails, it is common for cattle owners in Kerala to try sourcing paddy straw at a high price from nearby states such as Karnataka or Andhra Pradesh.

And providing commercial feeds all round the year are just not financially feasible for a small farmer. Against this backdrop a new type of cattle feed that can also be used for small ruminants like goats called TMR (Total mixed ration) has been introduced in Aluva, Kerala, on a very small scale.

“TMR feed concept is an old one being practiced in large farms across U.S. and some other foreign countries. I came to know of this feed while I was working in Jaipur, Rajasthan.

“One of the specialists working there had given this idea/formula to a progressive farmer and shared this information with me and I took it further from there,” says Dr. R .Unnikrishnan, Veterinary Surgeon, Animal Husbandry Department, Govt of Kerala.

Each mouthful of TMR feed that an animal consumes contains the right amount of ingredients for a balanced ration.

For animals fed with this special ration it has been observed that the milk production increases to five per cent more than those fed with commercial or conventional feeds.

Also there is no question of overfeeding. In conventional or commercial feeds, a farmer may not know whether he is overfeeding or underfeeding his animal, according to Dr. Murlidharan Nair, former Assistant Director Govt of Kerala, Thiruvananthapuram. Priced at Rs. 17 a kg, it is a complete feed by itself. There is no need for any extra supplement.

However green grass is a must for the animals along with this feed. An animal weighing 300 kg and yielding 20 litres of milk per day requires 13-14 kg of TMR and five kg of green fodder.

“In Western countries green fodder is mixed well with TMR and used. But here in India the scenario is different. Green fodder is not mixed because it affects the ‘keeping quality’ of the feed and reduces its shelf life,” says Dr. Unni.

Some of the ingredients that go into making of this feed include ground nuts, sesame, red gram along with molasses, toxin binder, salt and vitamin mineral mixtures. When given as feed the animal cannot consume more or less thus limiting expense for a farmer.

“Given the constraints for land in Kerala, most dairy farmers feed their animals by purchasing commercial feeds at a high price. Even paddy straw is highly priced. Deficiency and underfeeding of green fodder further worsens the situation affecting the economics of dairy farms badly. Added to this is the increasing incidence of diseases often caused from commercial feeds,” explains Dr. Unni.

Mr. Jacob, a dairy farmer from Ernakulam with around 20 dairy cows, started using TMR ever since it was introduced in the region. Satisfied with its performance the farmer started recommending this feed to others.

“Not only has the milk production increased but also the fat content and saturated no fat percentage too have shown significant improvements. Today I get Rs.2-3 more per litre from the dairy society as a result of this change,” he says.

Like Mr. Jacob, at present, there are nearly 20 farmers who are feeding their backyard cattle with this feed.